I managed to get the little 5-volt 1 wire network I mentioned earlier, built up and running. Even fishing the wires wasn't too hard, "thanks" to the distinct lack of insulation in some of my walls. I did have to patch a section of the main run (I used a 100 ft run with short stubs to hold the sensors) when I put a staple through the cable while attaching it to the rafters. Doh!

The graphs make it look colder inside than it really is as I purposely put the sensors in all the cold spots. The kitchen has a zoned radiator that we can use if we are hanging out there, and the wild swings in my office are just the result of me closing the door when I'm not in there. The dining room is the warmest and I will eventually add a sensor there to put an upper bound on the data.

I didn't really like any of the pre-canned software options for it, so I rolled my own using xmgrace, digitemp, rsync, and cron. This is pretty crude, but it is a decent placeholder.
Posted by Patrick McManus at 9:35 AM

So, I live in Maine. The locals say, quite correctly, that its the way life oughta be. The way we keep massive hordes away from our paradise is to make it kinda chilly 6 months of the year. The fact that I live in a circa 1830 farmhouse is a constant reminder of that. 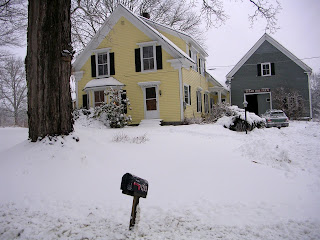 Last winter I froze a kitchen water pipe in the basement. It was due to a gap in the foundation. I patched up the hole and insulated the pipe. (Oddly I inherited 90% of the water pipes insulated, but not this stretch.) The night it froze was not the coldest of the year (it was probably 20 above the coldest mark), but there was a strong wind and no snow on the ground so the cold air just swept through the gap onto the pipe. The rest of the winter passed without further incident.

I put a thermometer in the vicinity, but frankly the basement is kinda dark and creepy and you don't go venturing into the back in the winter without a reason. So the thermometer wasn't all that useful. The sensible thing to do would be to put a $20 wireless thermometer (e.g. AcuRite Digital Wireless Weather Thermometer Indoor Outdoor

) down there with the readout in the kitchen.

But why do that, when we could go for geek overkill?

The wireless thermometer has some downsides: the receiver is clutter for something rarely used, I still have to remember to look at it, it has no log and the most interesting data is when I am sleeping, it only measures one place per piece of clutter, it lacks an alarm facility, and it needs batteries that inevitably will die in situ.

Clearly this is a job for a $500 computer instead, right?

It appears this is generally done with a "one-wire" network. 1-wire is a dallas semi standard for simple devices that can be powered and read with one wire. You daisy chain them together, typically using one wire from a piece of cat-5. You really need 2 wires, the second is for ground.

This is really neat stuff. There are sensors for temp, humidity, pressure, and even ground water for your garden. A bunch of places sell this stuff in kits, where the sensors come in a little box with an rj-45 "in" and an "out" if you want to chain another senor off of it. Or you can just buy the sensors for a lot less and solder the leads onto the ground and data wires wherever you want a reading. Each one has a serial number it reports as part of the 1-wire protocol so you can tell them apart, and its pretty easy to auto explore the chain and then power each sensor individually to get a reading (don't read them simultaneously).

The temperature gadgets, completely assembled wirth rj-45 connectors and little cases can run $25 each. But the sensors themselves are just $4 or less in single quantities. (Buy them by the thousand and you can get them for a buck.) I bought just the sensors.

In addition to the sensors, you also need a driver circuit to drive the power, do the polling, etc. There are several schematics for building them, but I gave into my software engineering side and bought a prebuilt one wire usb interface, for $28. 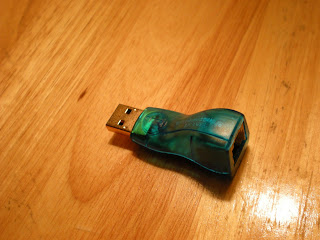 My primary interest is in the basement, but as long as I'm stringing a cable along the rafters I might as well measure a few different points. So I'll grab my office, the basement, the dining room, and the kitchen. I might stick the final sensor outside and cover it in shrinkwrap so there is a "control" number to compare the others to. We are heating this season with a pellet stove instead of central heat, so this information ought to help determine the effectiveness of the various fan placements I'm considering.

Once everything is in place the data can be captured a myriad of ways. The most common are the one wire filesystem, or by using digitemp. (google bait: if digitemp returns CRC errors, clear the configuration file it saves - this cost me hours of resoldering connections that were just fine.) After that normal linux graphing software can go to town.

I need to order a couple more sensors to layout the final network - I wanted to build a prototype first. It was easy enough.

The way I wired it, only the middle two wires matter for the crimp. I have blue/white on the left and blue on the right as viewed with the clip down and the contacts away from you. We're going to use white for the signal and blue for the ground. Attach one of the sensors to the end of the cable. The signal pin is the middle one, and the ground pin is on the left. (Left is defined with the flat side of the sensor facing up and the leads pointed down. The right lead is not used, you can trim it off (I've just bent it out of place in this picture). 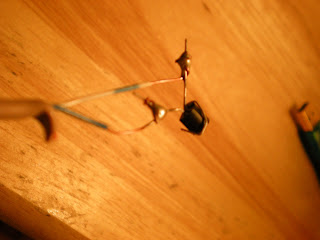 With the end sensor in place, you can add as many more as you like along the line by just stripping the insulation in place and soldering the leads right onto the cable wherever they need to go. This 1-wire stuff is extremely forgiving of my attempts to pretend that I know what I'm doing with electronics hardware. 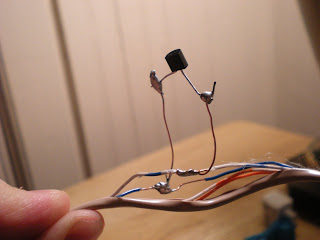 Obviously you need to tape up or shrink wrap all the joints, I left them open on the prototype for photos. With this in place, digitemp -a -r 800 happily reports two different sensors within half a degree of each other. Huzzah!

Now its off to grab the sensors I need for the real thing, installing the cable in the basement along with the other probe points, and getting a graph and alarm server going on the IP network. Such fun!
Posted by Patrick McManus at 7:45 PM

Recently I implemented patches to implement DNS prefetching in Firefox. I am primarily interested in their impact on Fennec (aka Mobile Firefox), but it looks like they will land first in Firefox 3.1 beta2. The, hopefully final, glitches are being shaken out of the patch now.

DNS resolutions are always dominated by latency instead of bandwidth. Particularly on mobile networks the latencies are very high. That makes them perfect candidates for speculative pre-fetching. The advantage is in the latency improvement - instead of waiting for a hostname lookup when you click a link, do that lookup while you're reading the page the link is embedded in. Because the lookups are so small (generally one runt packet in and out) the cost of any wasted over optimistic lookups really doesn't impact the performance of browsing. Good payoff at low cost, the best of both worlds.

The basic benefit is simple: if you click on a link using a new hostname, you save a round trip time. On some networks this can be a substantial improvement (800ms or more) in responsiveness. Some describe this simply as "figuring out the IP address of every link before you click on it".

The Firefox implementation takes this approach one step further than just pre-resolving anchor href hostnames. It uses the prefetch logic on URLs that are being included in the current document. By this I mean that it uses the prefetch logic on things like images, css, and jscript that are being loaded right away, in addition to anchor links which might be clicked on at a slightly later time.

At first that seems non-sensical. How can you pre-fetch the DNS for something you are fetching right now? Where does the "pre" come in? The answer is not so much in the definition of "pre" as it is in the definition of "right now". Most HTTP User Agents, Firefox being no exception, limit their number of simultaneous connections and hosts. Typical pages embed quite a few objects and it is easy to run into these limits. When this happens the browser queues some of the requests. The Firefox pre-fetch DNS implementation allows those queued requests to overlap the high latency host resolution with whatever transfers might be going on without creating an excess level of parallelization.

While this is just a secondary benefit, it can be meaningful. For example, on the day I grabbed a snapshot of http://planet.mozilla.org/ it required 23 unique DNS resolutions in order to render the base page. Most of these were in img URLs. When loading the page with the prefetch patches, even with a cold cache, 16 of them were either fully completed when needed for the first connection or at least already in progress. The result, measured on an EDGE network, was a 4% overall improvement in page load time. Not bad for something that does not reduce bandwidth consumption in any way.

Basically, it just works. You don't need to do anything. But there are a few configurables out there for both browsers and content providers.

First, as a browser you might want no part of this. Fair enough - its your browser. If you set the preference network.dns.disablePrefetch to true the prefetch code will never take effect, no matter what any other configuration is set to.

Furthermore, as a security measure, prefetching of embedded link hostnames is not done from documents loaded over https. If you want to allow it in that context too, just set the preference network.dns.disablePrefetchFromHTTPS to true.

Content providers have a couple neat tricks available too. These are meant to be compatible with Chrome.

Setting content to on will reverse the effect. You can never turn pre-fetching on in a browser that has it disabled by preference, but you can undo the impact of a previous x-dns-prefetch control command. In this way, different content provider policies can apply to different portions of the document.

The last configuraton possibility allows the content provider to force the lookup of a particular hostname without providing an anchor using that name. This is done with the link tag:
<link rel="dns-prefetch" href="http://www.spreadfirefox.com/">

The href attribute can contain a full URL, or just a hostname. Hostname only attributes should preceed the hostname with two slashes:
<link rel="dns-prefetch" href="//www.spreadfirefox.com">

Content providers might use the link notation in a site-wide home page in order to preload hostnames that are widely used throughout the site but perhaps not on the home page.
Posted by Patrick McManus at 4:05 PM