You don't see a lot of HTTP Content-MD5 response headers, but I just discovered some piece of code that generates unpadded base 64 versions.. i.e. a 22 byte:

I figured HTTP followed MIME rules and required a multiple of 4 characters.. i.e:

Weirdly, after checking the relevant specs it isn't actually clear to me if the = pad is required. I'm probably missing something obvious. But as this topic generates absolutely 0 google juice, this post is a public service announcement - expect both versions in your clients.
Posted by Patrick McManus at 11:17 AM

Firefox Pipeline Patches - Try them out

As you may know, I've been on a little odyssey to make pipelining safe, fast, and aggressive. I've got a dozen patches for Firefox 4 that do that.

This post is your chance to try them out. Download a build for your favorite OS and try them:

You will still need to set network.http.pipelining to true in about:config in order to enable the code. You can also set network.http.pipelining.aggressive to true if you want to disable any of the "gently test the waters" code. I do that when I want to measure the pipelines, but leaving aggressive mode off is probably a good idea if you want to ensure the smoothest experience possible, but I gotta say that the various recovery mechanisms are working well enough (and are used rarely enough) that I am considering making normal mode considerably more like aggressive mode.

Consider this a beta level pre-test. I want your feedback and any bug reports.
Posted by Patrick McManus at 4:32 PM

When choosing between more than 1 idle persistent connection FF <= 4.0 goes with a FIFO approach. I was thinking about ways to tune this.

I was going to experiment with making that a LIFO. A LIFO afterall should have better cache behavior and would allow the cache size to shrink to a more natural size as the older members remain untouched and timeout. The FIFO will basically keep the size pinned at its maximum while it cycles through all the connections which wastes system RAM with both the client and server maintaining extra idle TCP sessions. It is also the worst possible processor cache behavior. The possible argument in favor of FIFO is actually that connections are expensive to open and we've already opened these so maybe we want to keep it pinned to its maximum size just in case we need it again - it isn't obvious what to do or if it matters much.

Thinking a little further I realized that the major differentiator between these sockets is not a timestamp at all - it is the CWND associated with them on the server. Many web servers at least partially ignore the TCP suggestion to return to slow start after an RTO of idle activity so it is reasonable to assume that some of the connections have larger CWNDs than others as long as we aren't in an environment where the previous transfers have been actually bottlenecked by bandwidth - and on the web that almost never happens, RTT and document size bottleneck most transfers. Even if available bandwidth is the real bottleneck that just moots our metric, it doesn't provide any information that steers us the wrong way.

When choosing which connection to use we want to choose the one that has the largest CWND on the server. Unfortunately we cannot see directly into the congestion information on the server, but assuming that previous transfers have been bottlenecked by RTT (approximately a constant for all connections to the same server) and transfer size then we can just use the one with the history of moving the largest amount of data in one burst as a proxy for it because that burst is what opens the congestion window.

I say one burst instead of one document because we want to include pipelines of multiple HTTP transactions as long as there wasn't an RTT between them. This is another reason to want pipelines - they will more effectively open up the CWND for us. We also want to use the maximum burst seen on the connection, not the necessarily the last burst - the servers we are interested in don't shrink the CWND just because it isn't all being used for each burst.

The implementation is easy - the idleconnection list is changed from being sorted as a FIFO to being sorted according to this "maxburst" metric. The code and bugzilla are here.

Using an experiment designed to show the best case, the results are better than I expected for such a minor tweak. This was my process:
There is 250ms of RTT and several megabits of bandwidth between the client and server in my test. 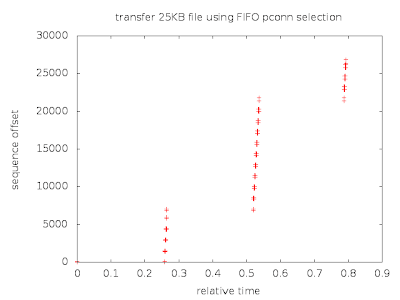 My patched browser, using the sort by CWND algorithm, loads the target image on the idle persistent connection that was used to transfer the largest image (2MB+) from the base page.


Their history is the only difference between the two connections - at the time of requesting the 25KB image they are both connected and idle. There is a 250ms RTT between my host and the server. 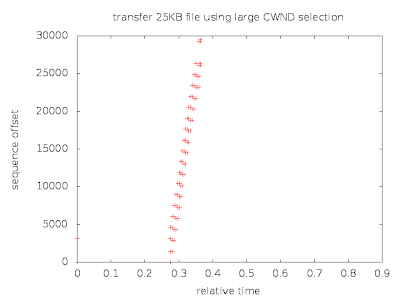 The difference is huge. The default algorithm takes 3 round trips to transfer the document as it works its way through growing the congestion window. That adds up to 793ms. The sort-by-cwnd algorithm inherits a congestion window large enough for the task at hand and moves it all in one stream - just 363ms.